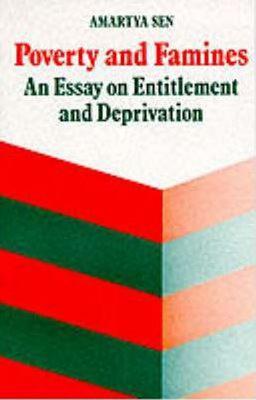 This personal experience was what later drove Sen to write his book: Poverty and Famines: An Essay on Entitlement and Deprivation. Here, he argued that famine occurs not only from a lack of food, but also from inequalities built into mechanisms for distributing food. Sen argued that the driver behind the Bengal famine was caused by the raising of food prices whilst wages remained stagnant, unable to keep up. This, tragically, caused millions of workers to starve to death. Importantly, Sen presents data that there was adequate food supply in Bengal at the time, but that because of panic buying, hoarding and price gouging when a seller spikes the price of their goods , due to the ongoing war in the region, particular groups of people such as labourers and urban service providers did not have the means to buy food.

Theoretically, there was no physical force preventing them from buying goods.

However, their positive freedom, freedom to, was affected. The workers still starved, as they were not positively free to do anything. They had no capability to actually buy food in practice, as they did not possess the money.


Hence, they were unable to gain the functioning of nourishment. This is a moral, paradigmatic framework of thought, a way of thinking about moral issues. The capabilities approach focuses on the information that we need to make judgements about individual well-being, social policies and so on. Importantly, this approach rejects the notion that these judgements can be made solely through monetary terms, as this is regarded as normatively inadequate at assessing individual advantage and social arrangements.

Essentially, the capabilities approach argues that it is impossible to assess human well-being through monetary calculations alone.


Continuing his focus on social justice, Sen has also come under the spotlight for his assessment of the economic consequences of austerity — that is, government policies that aim to reduce government budget deficits through spending cuts, tax increases, or a combination of both.

Sen, like John Maynard Keynes , is against austerity. Yet, if austerity is as detrimental as Sen believes, then why is it that it seems to deliver electoral victories, especially in Britain? This is the question that Sen seeks to answer. He argues that the popularity of austerity amongst governments soared after the financial crash, as the overstretched role of the state was scapegoated for the crisis, rather than the clear failure of the market economy.

Sen is a fan of Adam Smith, but the social choice theory was originally developed by Marquis de Condorcet, a French mathematician who lived and worked during a period of revolution back in the eighteenth century. The theory was modernized in the s by Kenneth Arrow from Stanford University, who had also won a Nobel Prize for economics.

The reason is twofold: firstly, these national income statistics do not measure income distribution as it is; and secondly, there are various influences upon individual freedom as well as well-being that these statistics fail to give consideration to, for example, disabilities and exposure to serious illnesses in a contaminated environment. Sen further believed that the head-count technique of measuring the malice of poverty is insufficient. He did not only want to know how many people fell below the poverty line but also how far they fell below or rose above the poverty line.

It is possible to analyze income inequality among the poor as well with these statistics. Sen was a witness to the Bengal famine of , which is what inspired him to contribute to famine economics so much so that governments around the world have developed policies around his contributions.

Poverty and Famines: An Essay on Entitlement and Deprivation by Amartya Sen

Most policymakers and commentators had previously believed that famines ensue when the supply of food declines. Although this makes perfect economic sense, Sen proved through his study of famines in Bangladesh, India, and sub-Saharan Africa that famines also occur when the supply of food has not declined. In the year , for example, Bangladesh was hit by a famine although production of food was very high. Furthermore, Sen proved through research that it was not only the poorest people that were affected by famines; rather, even those who had suddenly experienced a decline in income for some reason were affected by food shortage.

As a result of his research, governments decided to replace the lost income of the poor during famines. Sen further found that famines do not happen in democratic countries. In India, for example, information spreads rapidly and criticism about policies is not discouraged, which is why the country has never experienced a famine. Even though India is poorer than China, the latter experienced a famine that killed approximately thirty million people between and But, Sen did not just advocate democracy through this research.

As he studied famine economics, he analyzed gender inequality to boot. Of course, those who believe in aborting female fetuses would disagree with Sen that it is a social problem to reduce the female population thus. 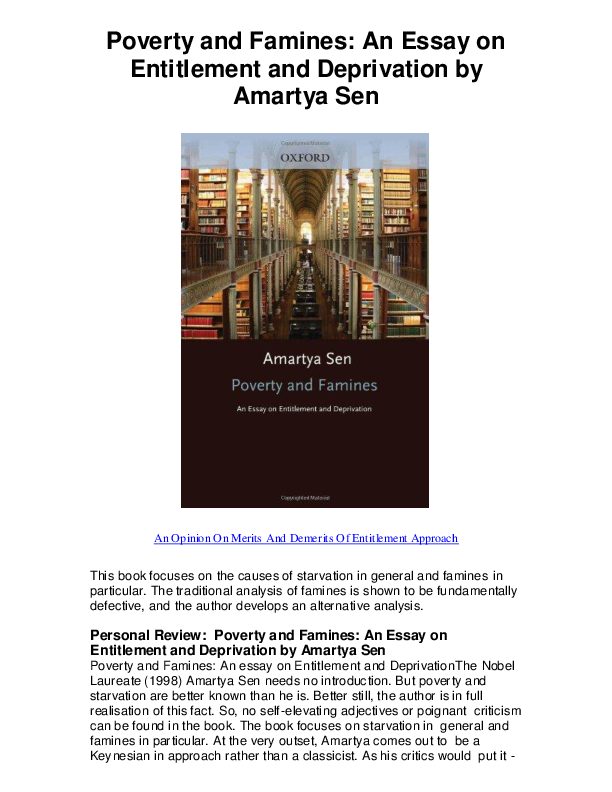 This theory of social choice analyzes the significance of individual decisions for collective welfare. He offers the example of India to illustrate this point. Sen explains another use of the social choice theory with an example of India. There was public debate on the issue of whether poverty in India was on the decline.

Upon analyzing the issue with the social choice theory, Sen discovered that reduction in poverty only affected those who were already very close to the poverty line. It is for this reason that the economist continues to trust evaluation of income distribution through a variety of measures rather than Gross Domestic Product and Gross National Product alone. With his contribution to the Human Development Index, the economist has theoretical evidence that education and healthcare reforms will alleviate poverty in developing nations. 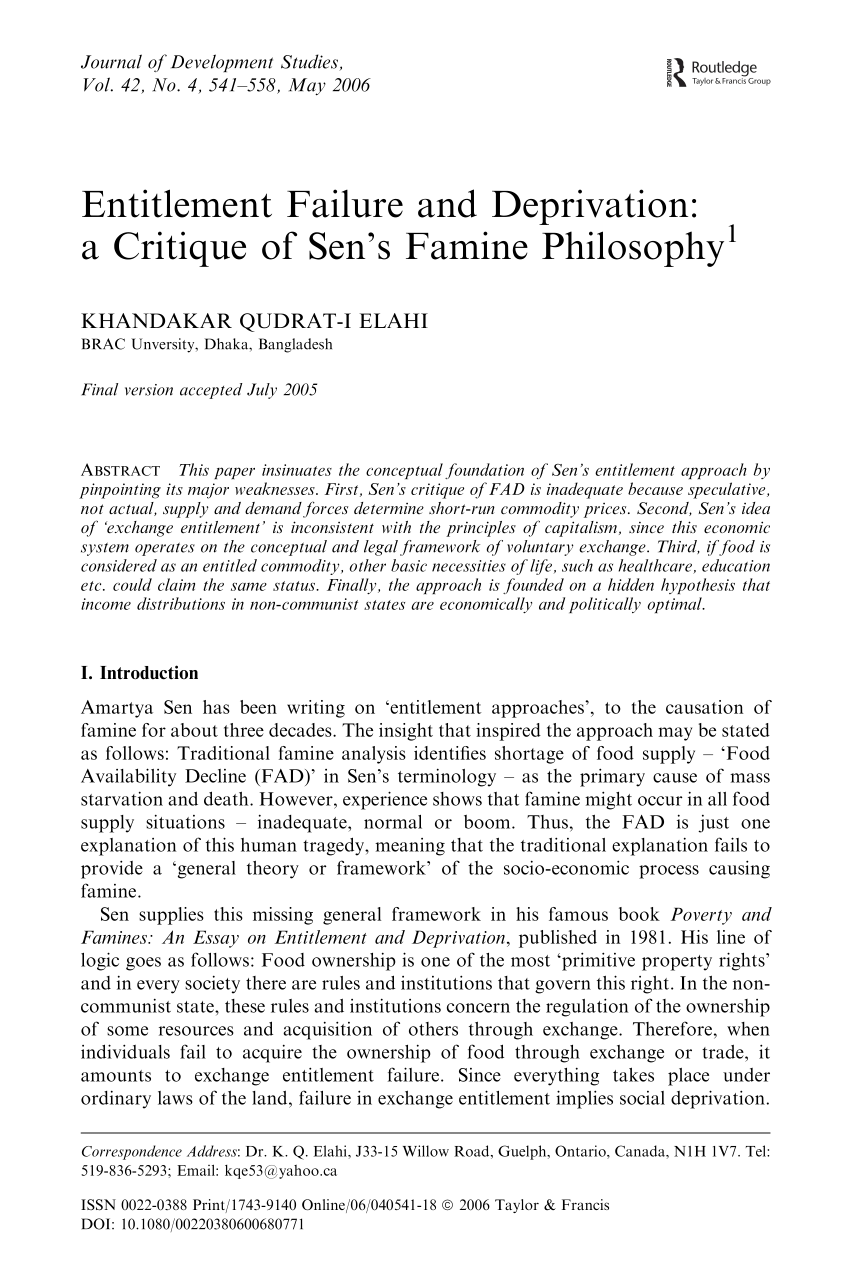 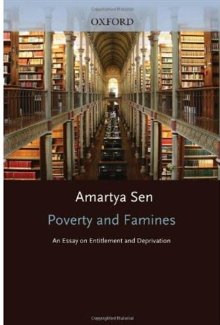 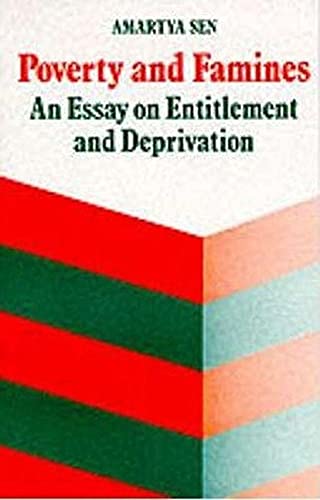 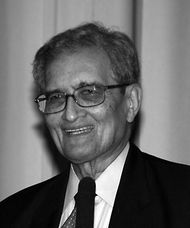 Related poverty and famines an essay on entitlement and deprivation summary